From the parking area, proceed ahead (east) along Split Rock Road for 0.3 mile. When you reach the second power line crossing, turn right and follow a dirt road uphill, under the power line. This is the route of the blue-blazed Split Rock Loop Trail, which you will follow for most of the hike. Before reaching the crest of the hill, the trail bears right and enters the woods. After a short, gentle climb, the trail descends into a hollow, then bears right and climbs another rocky ridge. Here, the green-blazed Righter Mine Trail crosses.

Soon, you'll notice a huge glacial erratic to the left of the trail. This boulder, aptly named "The Rock," marks the highest point on the hike (elevation 980 feet). Just beyond, the trail bears right and descends on a winding footpath, with some views through the trees. It then bears left and heads south over undulating terrain.

After again crossing the green-blazed Righter Mine Trail, you'll reach Cedar Point, marked by a single cedar tree. To the southwest, a cable television tower is visible on top of the ridge ahead. Just south of this tower is the site of a Hawk Watch (worth a visit on another occasion).

The trail turns right, soon reaching a rock outcrop, where it turns sharply left and descends on switchbacks. Just before a sharp right turn, the trail goes over a moss-covered mound of rocks -- a remnant of mining activity in the area. Turn left here, leaving the trail, and head uphill for about 100 feet to the mine opening of the Righter Mine. Note the drill marks in the rock walls around the mine shaft and the pile of tailings just below. Use caution, and do not step into the leaf-covered mine shaft.

After viewing this interesting feature, return to the trail, which turns sharply right and heads downhill through a rocky area to reach a wide woods road. Turn right onto this road, now following both blue and green blazes, and continue for 750 feet until the blue blazes turn left and cross the stream on a wooden footbridge. [Note:  As of January 2020, this bridge has partially collapsed. Until it is replaced, the stream must be crossed on rocks. This is generally possible, but it may not be possible if the water is high.]

On the west side of the brook, the trail proceeds through a rocky area and bears left to parallel the brook. It briefly joins an old woods road, then turns right, continuing to head south along the brook. In another 500 feet, it turns right and begins to climb, first rather steeply, then more gradually. Soon, you'll cross an old woods road and reach The Maze, where the trail has been routed through narrow passages between large rocks.

After crossing another boulder field, with several small seasonal streams, you'll notice a high ridge looming ahead. The trail bears right to skirt the base of the ridge, then – after passing a huge slanted boulder- turns left and climbs to the top of the ridge.

As you approach the ridge, you can see the Split Rock Reservoir directly ahead through the trees. To the right, a mountain is visible across the valley. You were there about an hour and a half ago! "The Rock" is situated at the top of this mountain, and you've hiked a U-shaped route to reach the spot where you are now.

The Split Rock Loop Trail now bears left, making another U-turn, and climbs to a rock outcrop at the crest of the ridge. It then comes out on an open rock ledge and heads west through the woods to end at the white-blazed Four Birds Trail.

Turn right, leaving the trail, follow Split Rock Road downhill to the reservoir dam, and follow the road across the concrete dam. Just beyond the dam, you will see, below to the right, the 32-foot-high charcoal-fired Split Rock Furnace, built of stone in 1862 to smelt magnetite ore into the iron needed for the Civil War. The furnace operated for only about ten years, and was abandoned in the 1870s. The parking area where the hike began is on the left side of the road, just beyond the dam. 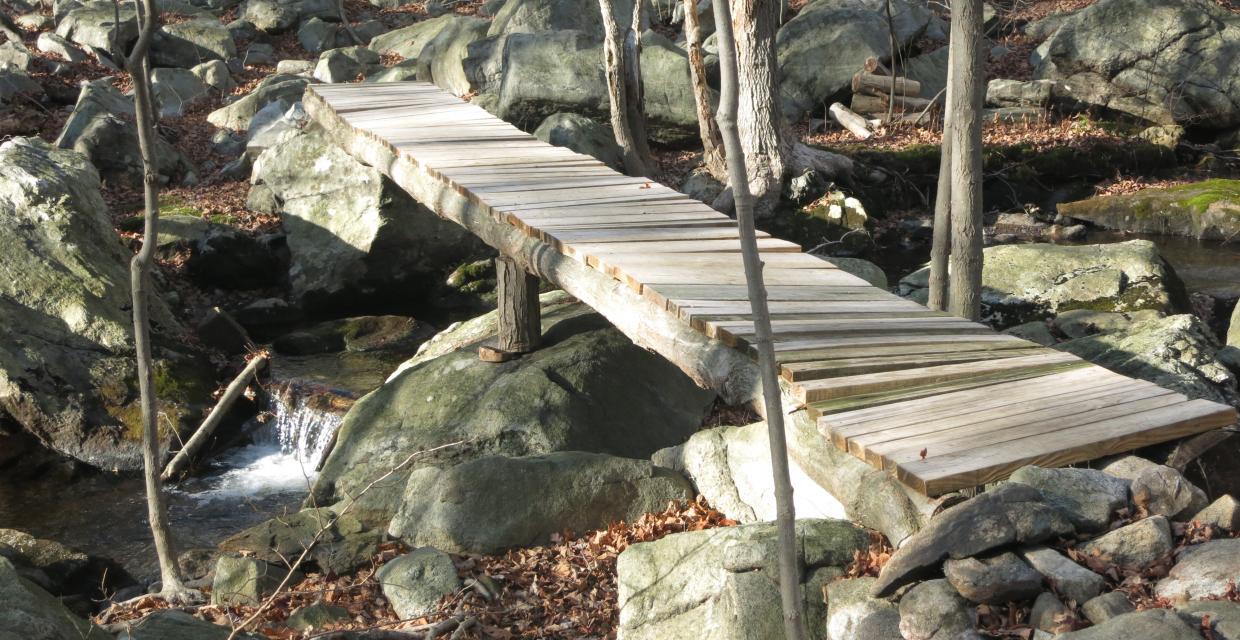 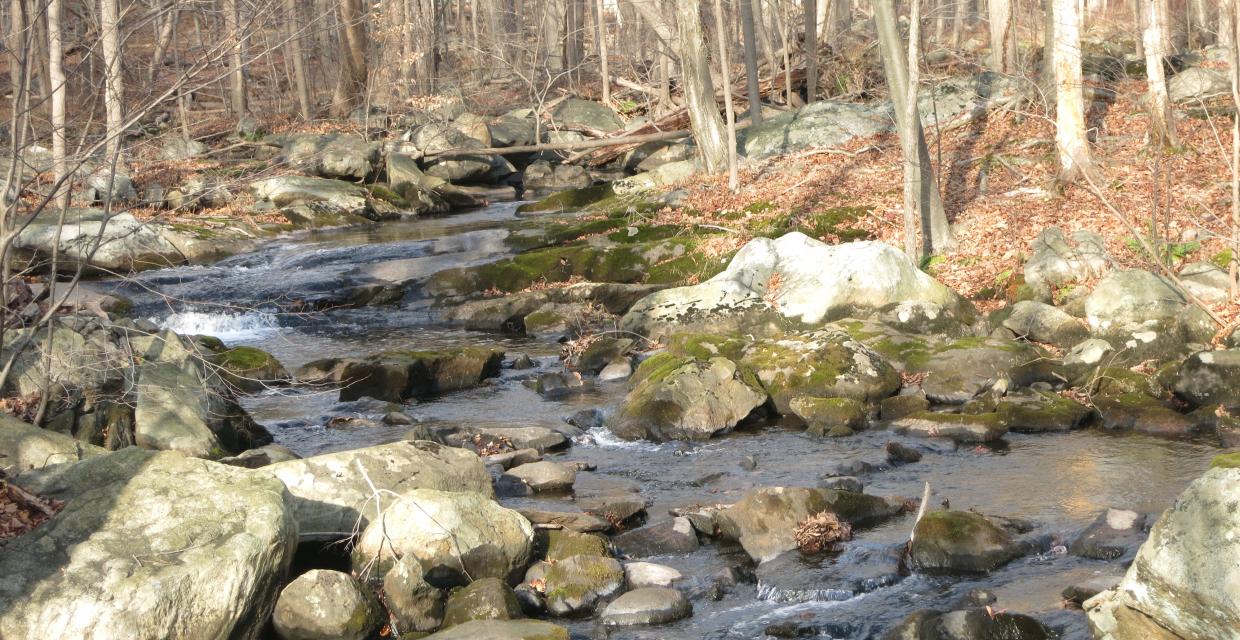 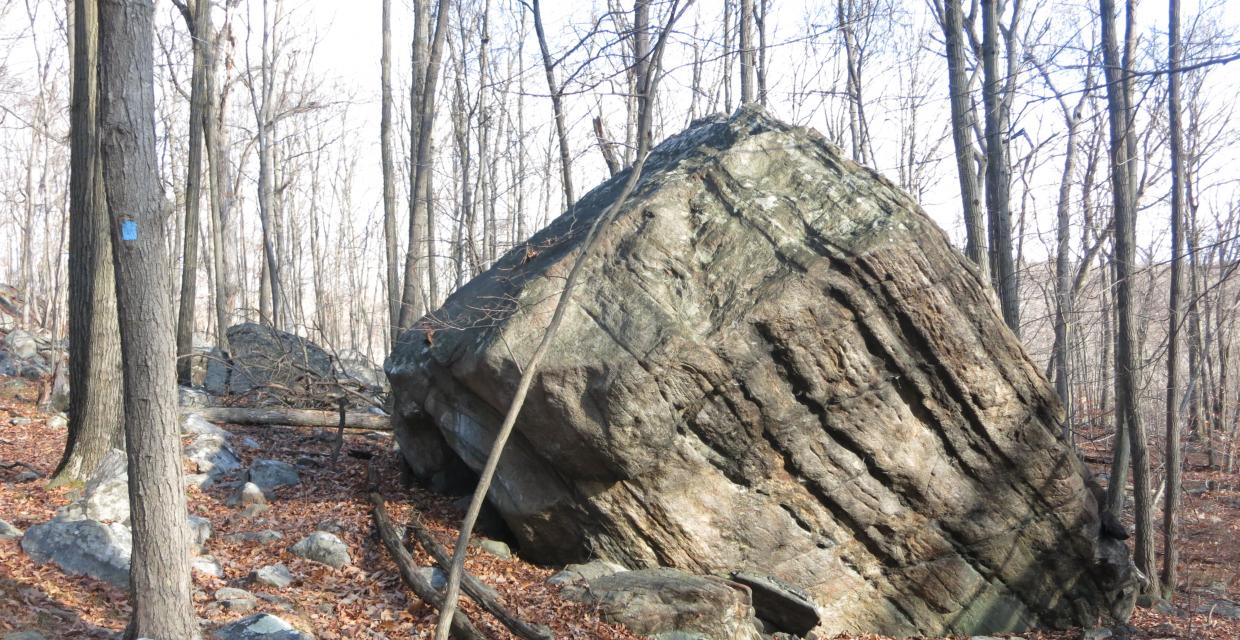 From the parking area, proceed ahead (east) along Split Rock Road for 0.3 mile. When you reach the second power line crossing, turn right and follow a dirt road uphill, under the power line. This is the route of the blue-blazed Split Rock Loop Trail, which you will follow for most of the hike. Before reaching the crest of the hill, the trail bears right and enters the woods. After a short,...

Take I-80 West to Exit 37 (Hibernia/Rockaway). At the bottom of the ramp, turn left onto Green Pond Road (County 513). Follow Green Pond Road north for 6.4 miles and turn right onto Upper Hibernia Road (opposite the Marcella Community Club). In 1.0 mile, turn left onto Split Rock Road and follow it for 1.0 mile to a traffic light that regulates traffic over the one-lane road ahead. Cross the narrow roadway over the dam of the Split Rock Reservoir, then turn left into a large dirt parking area on the left side of the road. Please note that parking along Split Rock Road is permitted only in this one parking area; cars parked elsewhere along the road will be ticketed.

rate experience
May 26, 2018
0
Tricky turn
At the end of the hike, when you are on the white-blazed trail and come to the step that says "...then turns right and crosses under the power lines," you need to keep a very sharp eye out for the right turn. When we did it today, the white blaze was on a remnant of a small tree that was laying on the ground, and we missed it. When we retraced our steps and found it, we also saw that the first white blaze after the turn was obscured by overgrowth. The bottom line is, when you make that left-hand turn at the power lines, your right turn is less than 5 minutes away. If you find yourself walking past multiple power line towers, you missed it just as we did.
Bustario
January 22, 2017
0
GPS coordinates have been corrected

The GPS coordinates have been corrected so that they now reference the parking lot at the southern end of the reservoir.  Thanks for pointing out the error.

Daniel Chazin
January 20, 2017
0
Parking GPS wrong?
The GPS coordinates point to the side of Split Rock Rd west of the reservoir, about 0.8 miles away from the parking lot on the map.
asmumsa
More Reviews
Log in or register to post comments