From the trailhead, head into the woods on the red-blazed Coppermines Trail. Just past the trailhead, you’ll come to a fork. Bear left and follow a branch trail that parallels a cascading stream and leads in 750 feet to the sealed-off entrance of the lower mine – a relic of Dutch explorations for copper in the 1600s.

Retrace your steps to the fork and bear right, soon passing the ruins of a stone building to the left -- the remnants of a mill that was built in the early 1900s to process the copper ore from the mines. This mining venture was not commercially successful, and it ceased operations in 1911.

The trail now begins a steady ascent on a woods road. In 0.2 mile, a blue-blazed spur trail that leads to the Kaiser Trail begins on the right, but you should continue ahead on

the red-blazed Coppermines Trail. In another 400 feet, the barricaded entrance to the upper mine is to the right of the trail. The trail now narrows to a footpath and soon levels off, with a cascading brook in a deep ravine on the left.

After crossing the brook on a wooden bridge below a cascade, the trail begins to climb again. It ascends a switchback and then follows directly along the magnificent gorge, with its series of waterfalls, below on the right. The trail passes attractive stands of rhododendrons, but most of the hemlocks, which once were dominant in the gorge, have been killed by the wooly adelgid.

Just beyond the end of the gorge, another spur trail on the right leads to the Kaiser Trail. This trail, blazed red/blue, will be your return route, but for now, continue along the red-blazed Coppermines Trail. The Coppermines Trail levels off, twice recrosses the brook, and proceeds through open woods with an understory of blueberry, crossing several seasonally wet areas on puncheons. Soon, the trail resumes a gradual climb, continuing through stands of dense young saplings.

After passing through dense mountain laurel thickets, the Coppermines Trail reaches a rocky area at the crest of the rise, and it descends a short distance to end at the white-blazed Appalachian Trail (A.T), with Yards Creek and Camp Road visible to the left. You’ve now gone a little over two miles from the start of the hike. Turn right at this junction, and climb steadily along the A.T., steeply in places, up the ridge of the Kittatinny Mountains. In about half a mile, you’ll reach a limited east-facing viewpoint to the left of the trail. The A.T. now ascends more gradually, then levels off.

In another mile, you'll come to a series of open grassy areas, with panoramic east-facing views. Lower Yards Creek Reservoir is visible directly below, and the northern end of Mt. Tammany may be seen to the south. The A.T. continues south along the ridge, with more views to the left of the trail.

In half a mile, the A.T. descends briefly, then levels off. Here, the blue-on-white-blazed Kaiser Trail joins from the right (the junction is marked with a sign). This trail will be your return route, but for now, continue ahead on the A.T. for another 0.7 mile. When the Kaiser Trail (also designated as Kaiser Road) leaves to the left in a third of a mile, you should continue to follow the A.T., which climbs briefly, descends a little, then begins a steady climb.

Soon, you’ll reach a sign marking the boundary between the Delaware Water Gap National Recreation Area and Worthington State Forest. Just beyond, you’ll come to a panoramic west-facing viewpoint over the Delaware River, with Poxono Island visible to the north, and Smithfield Beach directly across the river in Pennsylvania. Proceed ahead on the A.T. to the wide-open crest of Mt. Mohican (also known as Raccoon Ridge), marked by a large cairn. From here, there are spectacular views to the west, east and north.

After enjoying the vista, retrace your steps back to the first junction with the Kaiser Trail (now on your left), and follow this blue-blazed trail downhill. For much of the way, the trail is a grassy woods road, but in places it has narrowed to a rocky footpath. After about a mile of relatively easy walking, you'll come to a trail junction at a huge log, with a sign for a spur trail to the Coppermines Trail. Turn right and follow this short red/blue-blazed trail. After crossing two brooks, you’ll reach a junction with the red-blazed Coppermines Trail. Make a left here, retracing your steps as you descend through the gorge, and follow the red blazes back to the trailhead, where the hike began. 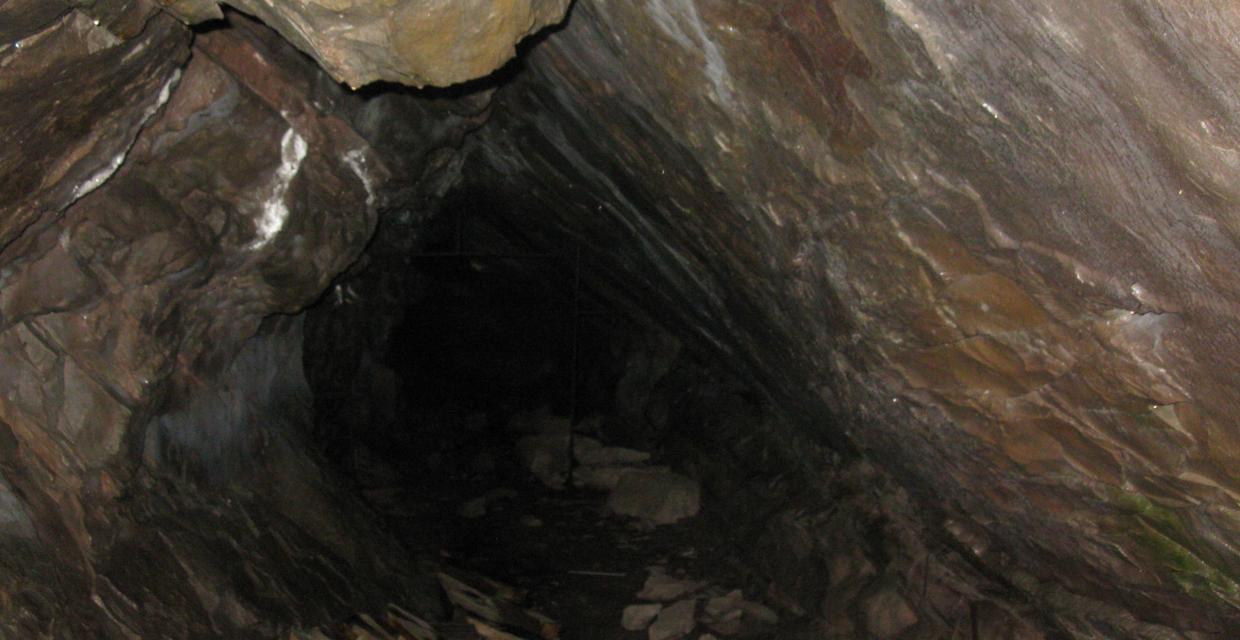 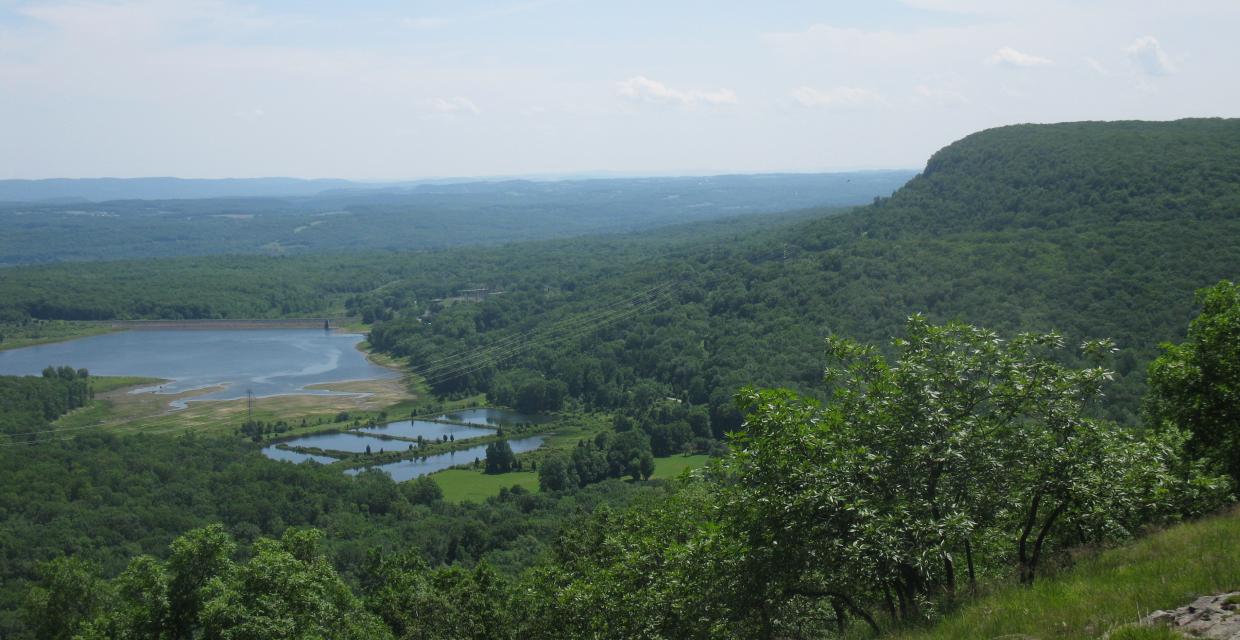 This loop hike passes an old copper mine, goes through a magnificent gorge, and climbs to the ridge of the Kittatinny Mountains, with several panoramic viewpoints.

From the trailhead, head into the woods on the red-blazed Coppermines Trail. Just past the trailhead, you’ll come to a fork. Bear left and follow a branch trail that parallels a cascading stream and leads in 750 feet to the sealed-off entrance of the lower mine – a relic of Dutch explorations for copper in the 1600s.

Retrace your steps to the fork and bear right, soon passing the ruins...

Proceed west on I-80 to the Delaware Water Gap and take Exit 1 (Millbrook/Flatbrookville), the last exit in New Jersey. Bear right at the bottom of the ramp and head north along the Delaware River on Old Mine Road. The road is only one lane wide for about half a mile, and a traffic light has been installed to regulate the two-way traffic. Continue for 7.5 miles to the Copper Mine Parking Area, on the left side of the road (the parking area is 0.5 mile beyond milepost 7 on Old Mine Road). Park here and walk across the road to the trailhead.

rate experience
May 24, 2017
5
Had a similar experience on 05/18/17
Did this hike. Views at the end were spectacular. Used the linked Delaware water gap park map for guidance. This poster's comment is still correct. As of 5/18/17, there is no sign where the kaiser and the AT intersect, and that intersection is really easy to miss on the way out. Coming back, the intersection is a bit more obvious. Also, the blazes along the trails can be sort of sparse, especially on the Kaiser. Where the trail leads is pretty obvious, though.
bromli
August 19, 2016
0
Coppermines/AT/Kaiser loop
Did the loop yesterday, though I extended it a bit by staying on the Kaiser Trail until the more northerly of the 2 spurs back to the Coppermines Trail.  The description is quite good, though there definitely isn't a sign at the intersection of the AT with the Kaiser Trail.  I used the Trail Conference map in the Avenza PDF Maps app, and was amused at the artistic license used in the placement of scenic points.  One of the mine markings (which presumably was supposed to be the upper copper mine opening) was way off, and the positioning of the scenic viewpoints on the AT between the Coppermines Trail & the Kaiser Trail was nowhere close to where there were actually open areas which allowed good eastward-facing views.  The view from Mt. Mohican was great!
KellnerB
October 15, 2015
0
Easy to miss the turn from AT on to blue-blazed Kaiser Trail
Did the hike today with one pup.  Really nice.  Spectacular fall foilage.  Light breeze.  Cool temps - in the 60's.  I saw one bow hunter along the AT so I'm glad puppy was on leash the whole way.  The stream and waterfalls were nice despite it having been a dry summer.   Be aware that it's easy to miss the turn on to the blue-blazed Kaiser Trail.  The description of the trail is accurate ("AT descends briefly, the levels off"), but there was no sign at the intersection.  It looks like someone used aluminum squares to blaze the trail, but the blue paint on the square is mostly flaked off.  Fortunately, at the trail intersection, someone had scratched into the aluminum square "Blue Trail".   Otherwise, it looks like a white square.  I met a fellow today hiking the Jersey section of the AT and ended up on the Kaiser Trail because he was following the mostly-while aluminum squares.  A four-mile off-course for him.    There are occasional blue paint blazes on some trees, but they're badly faded.
jwrushman
More Reviews
Log in or register to post comments