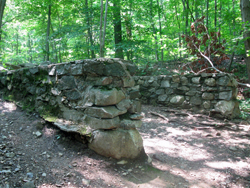 At the southern end of the parking area, a triple black-square-on-blue blaze marks the start of the Ramapo Lake Spur. Follow the trail into the woods, passing stone ruins. After going up a steep pitch, the trail continues to climb on a wide, rocky path, paralleling a cascading brook (particularly attractive after heavy rains).

As you approach the crest of the rise, you'll cross a stream on rocks. A short distance beyond, the white-blazed Castle Loop joins from the right. Just ahead, the trails bear left at a fork and descend to a trail junction at Ramapo Lake, where the Ramapo Lake Spur ends (there are street signs at the junction for South Shore Drive, North Shore Drive and Rye Cliff Road). Here, you should turn left, crossing the dam of Ramapo Lake.

On the other side of the dam, a triple blue-on-white blaze marks the start of the Ramapo Lake Loop. Just ahead, a sign marks the start of the LeGrande Hill Loop. Continue ahead for 500 feet on the joint Ramapo Lake Loop/LeGrande Hill Loop, then turn left onto the red-on-white-blazed LeGrande Hill Loop, which begins to climb. Soon, it reaches a viewpoint over the Wyanokie Mountains, with Ramapo Lake visible through the trees on the right. The trail now makes a brief but steep descent, then levels off. After climbing a little, it reaches a second viewpoint from a rock ledge. 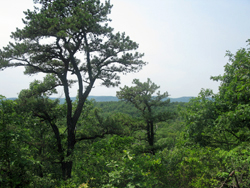 The LeGrande-Lake Connector now begins a steady descent, steep in places. On the way down, it passes a south-facing viewpoint over Pompton Lake. After a short climb, the trail reaches a panoramic viewpoint from a large open rock ledge, with High Mountain visible to the south beyond I-287.

The trail now descends to cross a stream, then climbs to a junction with an old paved estate road. It turns right and follows the road, which soon becomes surfaced with gravel. This road is a welcome contrast to the rocky paths that you have followed for much of the way. In 500 feet, the yellow-blazed Pool Hollow Trail begins on the left, but you should continue ahead, following the red/blue-on-white-blazed LeGrande-Lake Connector.

In a quarter mile, after descending a little, the LeGrande-Lake Connector ends at a T-intersection with the blue-on-white-blazed Ramapo Lake Loop. Bear left onto the Ramapo Lake Loop, which follows a gravel road around Ramapo Lake. In another 300 feet, bear right at a Y-intersection as the Cannonball Trail, marked by white-“C”-on-red blazes, joins from the left.

You now head north through dense vegetation, paralleling the western shore of Ramapo Lake. At first, the road runs some distance from the water, but after a while, the lake can be seen through the trees. In half a mile, you’ll pass a building on the hillside to the left (formerly used as a ranger station) and, a short distance beyond, a rock ledge to the right of the trail offers a pleasant view of the lake.

Soon, another gravel road joins from the left. Follow the road ahead, crossing a stone causeway that isolates a quiet pond on the left from the main body of the lake. Next, you’ll reach another Y-intersection. Here, the Cannonball Trail turns left onto an intersecting gravel road, but you should bear right and continue to follow the blue-on-white blazes. A short distance ahead, you'll notice a triple-blue blaze on the right. Follow this blue-blazed side trail for 500 feet to a rock outcrop overlooking the lake. After taking in the view, return to the Ramapo Lake Loop and turn right.

After passing a small, abandoned stone building to the right, you’ll come to another intersection. Here, you should bear right, once more joining the white-blazed Castle Loop.

Follow the white and blue-on-white-blazed gravel road that runs close to the shore along the northern end of the lake, passing a viewpoint over the lake from a rock ledge on the right. Soon, you'll pass a private residence on a ledge to the left. At the end of the lake, a triple blue-on-white blaze marks the end of the Ramapo Lake Loop. Continue ahead to a T-intersection with street signs, proceed through a gap in the guardrail at a sign for the Castle Loop Trail and the Ramapo Lake Spur Trail, and continue along the black-square-on-blue-blazed Ramapo Lake Spur, retracing your steps back to the parking area where the hike began. 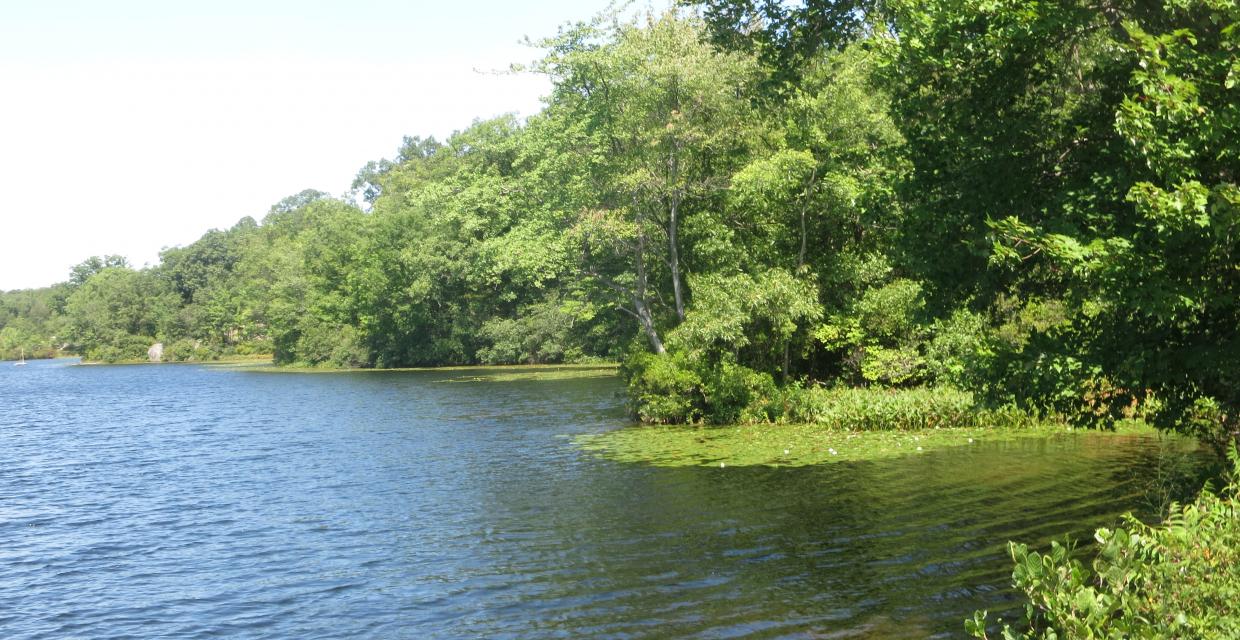 This hike climbs to several panoramic viewpoints in the Ramapo Mountains and loops around scenic Ramapo Lake.

At the southern end of the parking area, a triple black...

Take I-287 to Exit 57 (Skyline Drive) and proceed north on Skyline Drive. Just ahead on the left is the Ramapo Mountain State Forest parking area.

rate experience
June 17, 2012
0
Thanks for the reply and the
Thanks for the reply and the updated info!!
greenapple
June 12, 2012
0
Hike has been updated
Thanks for posting your comments on the hike.  Because of your comments, I decided to recheck the hike myself, and I now fully understand why you missed the turn.  The first turn onto the woods road is no longer identifiable as such, as a huge blowdown has obscured the road coming in on the left.  I thought it best to eliminate mention of the woods roads and just mention the turn onto the paved estate road, which is clearly identifiable.  And I'm not at all surprised that you missed the turn of the yellow-blazed trail off of the road.  The turn is very poorly blazed, and I would probably have missed it myself were it not for the fact that I was counting my paces to measure the 500-foot distance.  The trails chair for the area has been informed of the issue with the blazing, and I am sure that he will be taking corrective action.  In the meantime, I have updated the hike description.  Thanks again for bringing this to our attention!
Daniel Chazin
June 07, 2012
0
nice hike, but did it a little differently
Nice hike!!  We missed part of the hike, but ended up in the right place.  When reading the description, the 5th paragraph says:     "It turns right and follows the road, then bears right at the next two junctions onto intersecting roads. In about 500 feet, the yellow blazes turn left, leaving the road, and reenter the woods..."  I kept looking for the 2nd right junction, and therefore didn't see the yellow blazes go back into the woods, but maybe I missed it.(?)   In any event, we just kept walking on the road looking for the 2nd junction and eventually saw the private residence (refer to the last paragraph), so we cut out a few paragraphs, but didn't get lost.   The hike is good, but it was very isolated, so if you don't like being all alone this might not be for you.  In the beginning when we got on the Lookout trail, we only saw 1 person from that point until we got on the road that  goes along the lake near the end.  Nice viewpoints, solitude, rock slabs at viewpoints are nice places to rest.
greenapple
More Reviews
Log in or register to post comments