At the parking area, you'll see a triple-yellow blaze that marks the start of the Wilkinson Memorial Trail, which you will follow for the first half of the hike. The trail begins to climb on a winding woods road, passing a stone foundation to the right. After about a third of a mile, the trail briefly leaves the road to cross a stream. The climb back to the road is rather steep, but the grade moderates when the trail turns left and rejoins the road.

Half a mile from the start, the red-on-white-blazed Breakneck Bypass Trail begins to the right. This will be your return route, but for now, continue ahead on the yellow-blazed Wilkinson Memorial Trail, which soon turns left and descends slightly to cross a stream.

The trail now begins to climb Sugarloaf Mountain on switchbacks. After a steep section, the grade moderates, but the last part of the ascent is a very steep climb over rocks. At the top of the climb, you will emerge at an open area on the south end of the summit ridge. A single cedar tree and a gnarled dead tree overlooking the river mark this spot; you'll want to pause, rest from the steep climb and enjoy the spectacular view!

Storm King Mountain (marked by the highway gash across its face) is across the river to the left, with Schunemunk Mountain in the distance to its right. To the south is Breakneck Ridge, and the fascinating Bannerman's Castle on Pollepel Island is visible directly below (for more information, go to www.bannermancastle.org).

Continue along the trail, which heads north along the summit ridge, climbing a little and then descending to another viewpoint. This one looks north along the river, with Dennings Point visible in the foreground, the Newburgh-Beacon Bridge beyond, and the city of Newburgh on the west bank of the river. From this second viewpoint, the trail continues to descend - first steeply on an eroded footpath, then more gradually.

Near the base of the descent, the trail briefly turns right onto a woods road, then immediately left. It soon levels off in a wooded area that was once farmed, passing a moss-covered stone foundation at the lowest point. After crossing another woods road and several seasonal streams, the trail bears right and begins to parallel the aptly-named Cascade Brook, climbing steadily but gently.

In about a third of a mile, the trail turns left, crosses the brook and a woods road, and begins a much steeper climb. On the way up, it comes out on open rocks, with the highest point on Breakneck Ridge visible to the right. Soon afterwards, the trail levels off along a minor ridge, then climbs steeply to another viewpoint (just to the left of the trail) at the summit. The elevation here is 1,220 feet, and this is the highest point you'll reach on this hike. From here, you can see the Newburgh-Beacon Bridge, Dennings Point and the city of Beacon (on the east side of the river).<

As you descend from the summit, you'll pass another viewpoint over the river and soon reach a junction with a woods road. Turn right, leaving the yellow-blazed Wilkinson Memorial Trail, and follow the blue-blazed Notch Trail. In a short distance, you'll come to another trail junction, where you should again turn right, now following the joint route of the blue-blazed Notch Trail and the white-blazed Breakneck Ridge Trail.

Continue to follow the joint Notch/Breakneck Ridge Trail (white and blue blazes) for over a mile. For most of the way, the trail is relatively level, although there are some ups and downs.
After about a mile, the trail makes several short but steep descents, then begins a steady, steep climb. On the way up, the blue-blazed Notch Trail branches off to the left, and you should continue to follow the white-blazed Breakneck Ridge Trail. A short distance beyond the junction, there is a view over Surprise Lake (and the youth camp located along the lake) from open rocks to the left of the trail.

At the top of the climb, you'll reach a 360-degree viewpoint - perhaps the most panoramic of the entire hike. You can see both north and south along the Hudson River (with the eastern section of Breakneck Ridge blocking the view in between), Bull Hill to the southeast, and Surprise Lake to the northeast.

The trail descends very steeply from the summit, then levels off. Keep a lookout for three red-on-white blazes on a large boulder to the right of the trail. These blazes mark the start of the Breakneck Bypass Trail (blazed with both red and red-on-white markings).

Turn right, leaving the Breakneck Ridge Trail, and follow the Breakneck Bypass Trail, which climbs a small rise. As you descend from the rise, watch carefully for a sharp left turn in the trail after 100 feet, marked with a double blaze on a rock and on a nearby tree.

Soon, you'll reach a viewpoint to the right of the trail, looking northeast over Sugarloaf Mountain, with the Newburgh-Beacon Bridge in the distance. This is the mountain that you climbed at the start of the hike, and you can even recognize the single cedar tree at the summit viewpoint! Continue to descend along an eroded woods road, with the trail having been rerouted to the left to avoid some badly eroded sections. After turning sharply right and leaving the road, the trail climbs slightly to another view of Sugarloaf Mountain - this one, at a closer range. 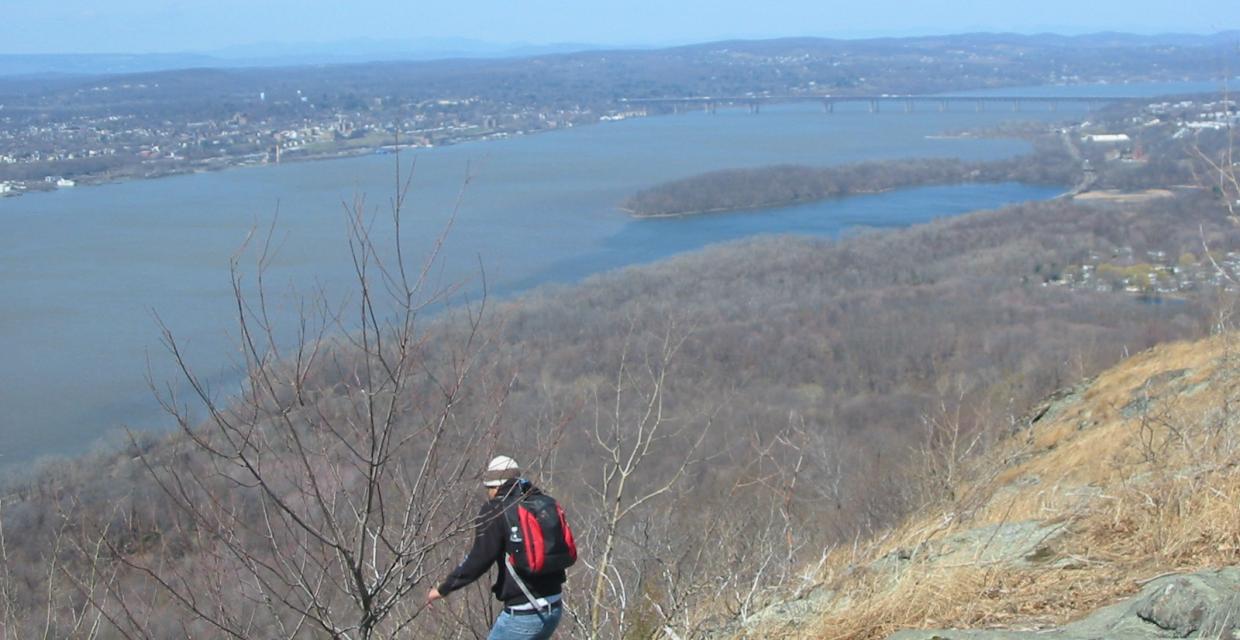 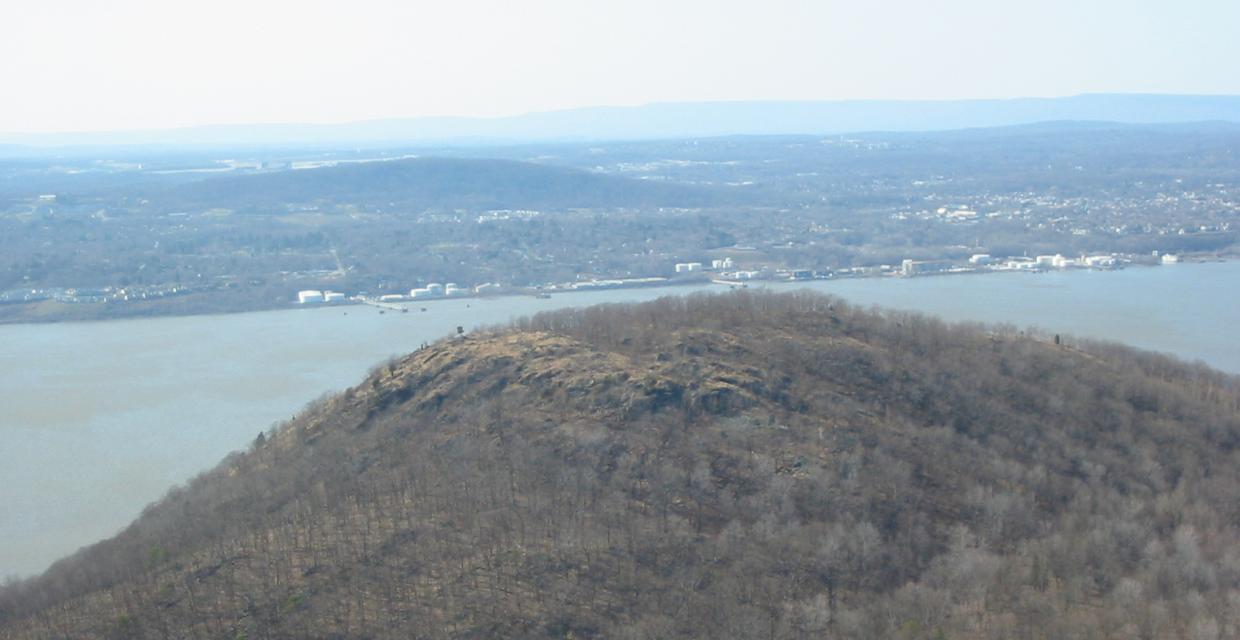 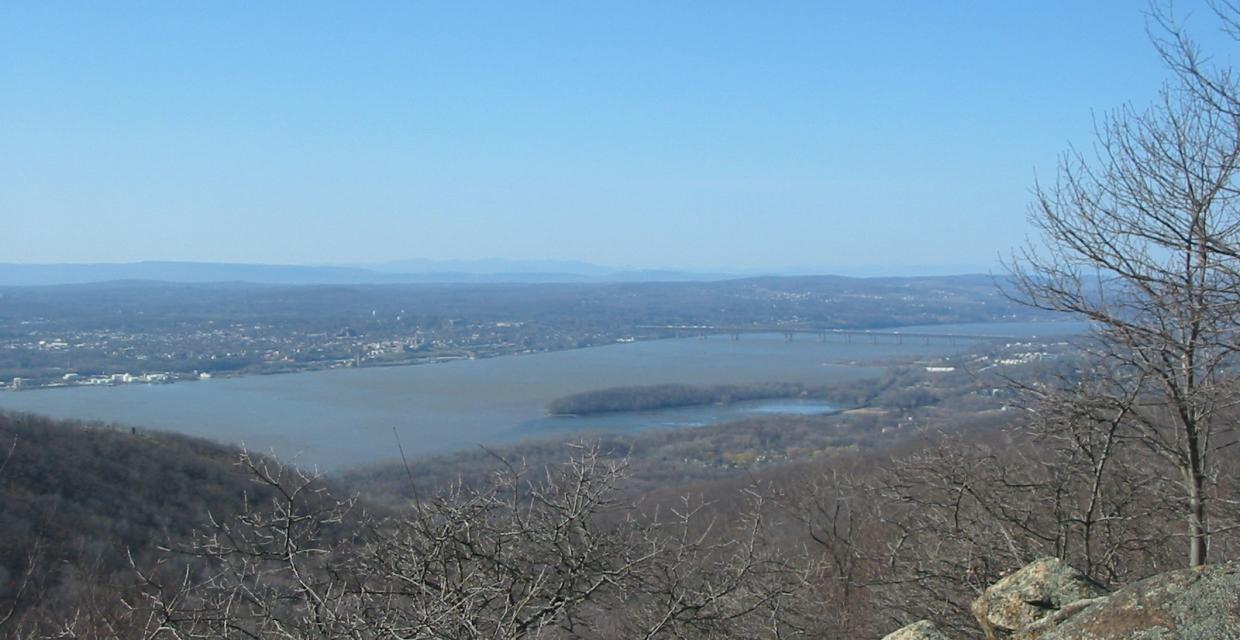 This loop hike steeply climbs to several panoramic viewpoints over the Hudson River, gaining a total of about 2,000 feet in elevation.

At the parking area, you'll see a triple-yellow blaze that marks the start of the Wilkinson Memorial Trail, which you will follow for the first half of the hike. The trail begins to climb on a winding woods road, passing a stone foundation to the right. After about a third of a mile, the trail briefly leaves the road to cross a stream. The climb back to the road is rather steep, but the grade...

From the east end of the Bear Mountain Bridge, proceed north on Route 9D for about 8.5 miles to the Village of Cold Spring. Continue ahead on Route 9D for another two miles (beyond the intersection with Route 301in Cold Spring) and pass through a tunnel under Breakneck Ridge. Proceed for another 0.3 mile and park in a small parking area on the right (east) side of the road, just before a small blue "adopt a highway" sign.

Take the Metro-North Hudson Line to the Cold Spring station and walk north on Route 9D to the trailhead. On weekends and holidays, two trains in the morning stop at the Breakneck Ridge station, a short distance north of the trailhead. Find link for info here

rate experience
October 26, 2017
3
Not the best I've done
Easily accessible with Metro North. The first half of the trail is a pretty steep climb, the second part is less strenuous but crowded. There are several nice views over the Hudson river, but you can always see some houses and buildings.
Marie from France
June 21, 2017
0
Trailhead coordinates have been corrected

The trailhead coordinates were indeed incorrect (they were on the opposite side of the river!) but they have now been corrected.

Daniel Chazin
June 20, 2017
0
Trailhead coordinates are wrong
It appears the coordinates for the trailhead do not match up with where the trailhead actually is.
bromli
More Reviews
Log in or register to post comments