From the kiosk at the southern end of the parking area, proceed south on the Horn Hill Loop Mountain Bike Trail, with blue-on-white diamond blazes. The trail passes through a pine forest and crosses several bridges. In about half a mile, you’ll cross the white-blazed Appalachian Trail, and soon afterwards, you’ll reach a junction with the red-on-white-blazed Ramapo-Dunderberg (R-D) Trail. Turn left onto the R-D Trail, which begins to climb West Mountain.

After ascending stone steps, the R-D Trail crosses the wide Beechy Bottom East Road, also marked with the blue-on-white blazes of the Horn Hill Bike Path. It continues to climb steadily through dense mountain laurel thickets until it bears left and crosses a gully. The trail now turns left, passes an old mine opening and continues around the side of the mountain. Soon, it turns sharply left, climbs steeply, then follows a level path alongside a cliff, with views to the left.

After passing a broad west-facing viewpoint, the trail bears right and continues to climb, soon reaching a panoramic viewpoint at a junction with the yellow-blazed Suffern-Bear Mountain (S-BM) Trail. You can see the Hudson River on the left and the hills of Harriman State Park ahead, with the New York City skyline visible in the distance on a clear day. You’ll want to take a break here to rest from the climb and enjoy the views.

When you’re ready to continue, proceed ahead on the joint R-D/S-BM Trail. In 300 feet, after climbing a ledge, the two trails diverge. Turn left and follow the yellow blazes of the S-BM Trail, which descends slightly and proceeds through a fire-scarred area. Although the fire took place a number of years ago, the forest is only now starting to regenerate, with some young pine trees growing in otherwise barren surroundings.

After descending to a valley and then climbing again, the S-BM Trail reaches a T-intersection where the blue-blazed Timp-Torne Trail joins from the left. Turn right, following the blue/yellow-blazed trail, which runs along ledges, with some views to the south.

In another 0.3 mile, after passing a viewpoint from a rock ledge to the right, you’ll come to a junction. Here, the yellow-blazed S-BM Trail continues ahead, but you should bear right, following the blue-blazed Timp-Torne Trail and sign pointing to a shelter. In 500 feet, you’ll arrive at the West Mountain Shelter, built in 1928, which offers spectacular views of the Hudson River to the southeast. This is a good place to stop for a break.

After you’ve rested for a while, retrace your steps back to the junction of the blue and yellow trails. Turn right at the junction, following the yellow-blazed S-BM Trail, which ascends slightly to reach an open area, with views of the Perkins Memorial Tower on Bear Mountain to the north. The trail now descends, first steeply, then more gradually through mountain laurel thickets. After reaching a valley at the base of the descent, it once again climbs steeply. In a level area at the top of the steep climb, there is a limited viewpoint to the southeast from a rock ledge to the right of the trail.

After climbing once more to reach the highest point on the ridge, the S-BM Trail begins a steady descent of about 750 vertical feet. It soon reaches a very steep section, where extreme care should be taken if the trail is wet, icy or snow-covered. The grade then moderates somewhat. About halfway down, the trail crosses a stream and joins an old woods road, with more gentle grades. The road is eroded in places, and some stretches of the trail have been routed away from the road.

At the base of the descent, follow the yellow-blazed S-BM Trail as it turns left onto a level road, the route of the Doodletown Bridle Path. When the yellow blazes go off to the right, continue ahead on the wide bridle path, now following the Fawn Trail, blazed with red-“F”-on-white blazes, which begins here. The trail soon begins a gradual climb. In about three-quarters of a mile, the Fawn Trail bears left, leaving the bridle path. Continue to follow the red-“F”-on-white blazes of the Fawn Trail.

In about a third of a mile, you’ll come to a Y-intersection, where you should bear right. In 100 feet, you’ll reach a second Y-intersection. Here, the bike trail bears left, but you should take the right fork, which descends towards the Anthony Wayne Recreation Area. Continue ahead at a four-way intersection, but when you reach a T-intersection, turn left onto a grassy road which leads to a picnic area. Continue through the picnic area, then bear right and cross a stone-faced bridge over a stream, which leads to the northern end of the Far South Parking Area. Turn left and walk to the southern end of the parking area, where the hike began. 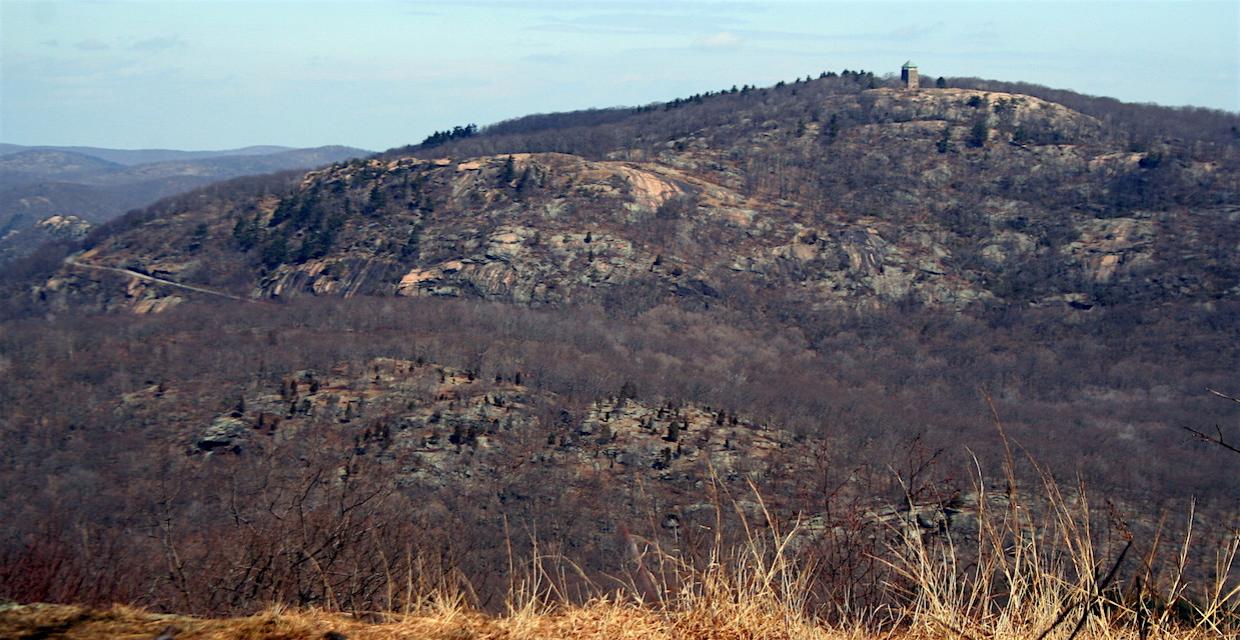 This loop hike climbs to the ridge of West Mountain, passing several expansive viewpoints over the Hudson River and the surrounding hills.

From the kiosk at the southern end of the parking area, proceed south on the Horn Hill Loop Mountain Bike Trail, with blue-on-white diamond blazes. The trail passes through a pine forest and crosses several bridges. In about half a mile, you’ll cross the white-blazed Appalachian Trail, and soon afterwards, you’ll reach a junction with the red-on-white-blazed...

rate experience
August 28, 2013
0
Great Hike - Make Sure You Have the Latest Maps!!
Another great hike, quite a few elevations changes, fairly varied scenery. The yellow trail section was beautiful. I would hike this again.   BUT, make sure you have the latest Harriman Bear Mountain maps, as of this writing updated 2013 (15th edition)! I had a 13th edition of the maps from 2010, and I had a previous version of this hike description, printed in the summer of 2012 (and left on my desk since then.) Talk about a perfect storm! It turns out that this hike description has been updated in December 2012 and the maps were updated in early 2013! I knew something was wrong somewhere along the Doodletown Bridle Path, passing obvious signs of the deblazed AT, and unable to confidently find my location on the map. It was an interesting day, and I managed fine after about 15 minutes of backtracking and checking my direction with a compass.   So the important lesson to me is getting back to the basics: frequently check for updated maps, and hike descriptions - and always bring a compass.
fitzgr
May 20, 2013
0
Elevation Change
Using the TC map I estimate about 1200 ft elevation gain  (plus tack on another 50-100 ft for trail variances that are too small to appear on the map).   If we take into consideration the similar amount of elevation loss (about 1050 ft), the overall elevation change appears to be nearly a wash (150ft or so).
smithg2010
May 20, 2013
0
Nice hike
Can anybody tell me what the approximate elevation change is through this hike?
cknipe12
More Reviews
Log in or register to post comments