You'll notice a triple yellow blaze, which marks the start of the Wyanokie Crest Trail. Proceed ahead on this trail, which briefly follows a fire road but almost immediately bears left and continues on a footpath. The trail climbs a little, crosses a woods road and a rocky area, then descends to Posts Brook. It crosses several branches of the brook on rocks (the crossing can be difficult if the water is high), then turns right onto a woods road, the route of the blue-blazed Hewitt-Butler Trail and the teal-diamond-blazed Highlands Trail. In 100 feet, the Wyanokie Crest Trail leaves to the left, but you should continue ahead on the blue- and teal-diamond-blazed trail.

After leveling off and passing through a wet area, the trail approaches Posts Brook, crosses a tributary stream on a log bridge, and reaches a junction with the white-blazed Posts Brook Trail. The Hewitt-Butler and Highlands Trails leave to the left, but you should continue ahead on the white trail, which closely parallels the cascading brook.

After traversing a level, rocky area, the Carris Hill Trail crosses a stream and begins a rather steep climb. The grade soon moderates, but after a third of a mile, it again climbs steeply over rocks, reaching a viewpoint to the southeast from a rock outcrop just to the right of the trail. The trail continues to climb to another rock outcrop, with a broader view. Here, it bears right and ascends to the left of a 40-foot-high massive rock face.

At the top of the ascent, a short detour to the right leads to a magnificent viewpoint to the east. The Wanaque Reservoir, contained by the Raymond, Wolf Den and Green Swamp dams, is in the foreground, with the Ramapo Mountains beyond, and a long viaduct of I-287 visible to the right. On a clear day, the New York City skyline may be seen on the horizon. This is a good place to pause and enjoy the spectacular view.

The yellow trail now climbs more gradually, soon reaching another viewpoint (partially blocked by trees), with a six-foot-high balanced glacial erratic silhouetted against the sky. The trail curves to the right and traverses open rock ledges with views to the south. After going through dense mountain laurel thickets, it reaches a fifth viewpoint -- this one to the southwest -- with pitch pines and a large glacial erratic. The trail continues on a level footpath through laurel and blueberry bushes and climbs slightly to end, on a rock outcrop with views to the north and west, at a junction with the blue-blazed Hewitt-Butler Trail and the teal-diamond-blazed Highlands Trail.

Turn sharply left here, following the sign for "O-H PRKG," and head southeast on the joint Hewitt-Butler/Highlands Trail (do not follow the route of these trails, marked by a sign to "Weis," that heads north). After reaching another large rock outcrop, with a limted view to the southwest, the trail begins a steady descent through blueberries and mountain laurel, finally leveling off on a woods road. It soon reaches the junction with the white-blazed Posts Brook Trail, which you encountered earlier in the hike. Turn right and follow the blue and teal diamond blazes westward, now retracing your route. When you reach the junction with the yellow-blazed Wyanokie Crest Trail, turn left, recross Posts Brook, and continue to the trailhead where the hike began. 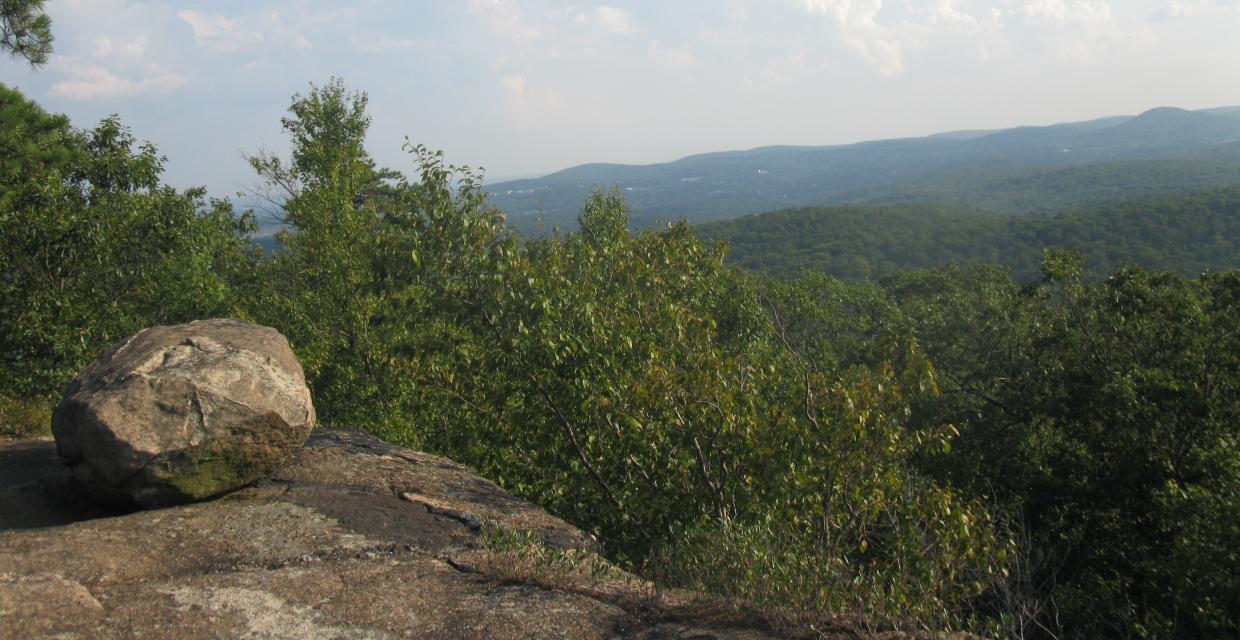 This hike passes cascades and a waterfall and climbs Carris Hill, with a broad panorama to the east over the Wanaque Reservoir.

You'll notice a triple yellow blaze, which marks the start of the Wyanokie Crest Trail. Proceed ahead on this trail, which briefly follows a fire road but almost immediately bears left and continues on a footpath. The trail climbs a little, crosses a woods road and a rocky area, then descends to Posts Brook. It crosses several branches of the brook on rocks (the crossing can be difficult if...

Take I-287 to Exit 53 (Bloomingdale) and turn left onto Hamburg Turnpike. Upon entering Bloomingdale, the name of the road changes to Main Street. In 1.3 miles (from Route 287) you will reach a fork in the road. Bear right, and in another 0.1 mile turn right (uphill) onto Glenwild Avenue (following the sign to West Milford). Continue ahead for 2.4 miles to a small parking turnout on the right, by a yellow gate and a kiosk.

Give $10 to support trails.
Give Now
Trail Conference volunteers maintain trails in this hike.
ATTEND AN EVENT

rate experience
February 10, 2019
5
Carris Hill along Posts Brook
This was truly an outstanding hike. Great vistas and challenging climbs. I highly recommend it.
mfalso
Log in or register to post comments